inaugural function of association of electrical and electronics engineering (LITEBRITEZ) 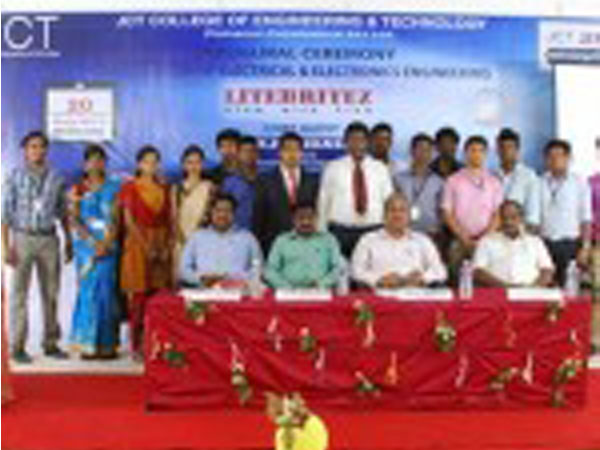 The inaugural function of the Association of Electrical & Electronics Engineering(LITEBRITEZ) for the academic year 2014-15 Inaugrated on 20th of AUGUST, 2014. Thiru K.Kalidasan, President OSAI Environmental Organisation, Coimbatore is the chief guest.. The chief guest was accompanied by our honorable Trustee and Esteemed Principal of our institution. The function was organized by the II, III and year and final year Electrical & Electronics Engineering students.

The programme commenced with the lighting of holy lamp. Prof.V.Jethose, Head of the Department of Electrical and Electronics Engineering welcomed the gathering. The Principal Dr.G.ramesh presided over the function and delivered the presidential address. He insisted the importance of teamwork and emphasized on the satisfaction with the available sources.

The chief guest delivered the Inaugural address stating the Role of Engineers in Environmental Conservation & Impact of Technological Development towards Environmental Degradation. The resource Person gave valuable information on the sustainable development, conservation of natural resources and their adversity due to industrialization. The industrial effluents should be disposed properly in order to preserve the environment.

The resource person provided the students a wide knowledge about the formation of rivers and other such sources. He also stated the extinction of rivers of south India with a lot of live examples. Also he emphasized on the importance of planting a tree to control the pollution. He also threw light on the global warming and its effects along with the green house effect.

The students found the session to be highly informative and useful. The programme came to the end with the vote of thanks proposed by the Association coordinator of department, Mr.B.Chandramouli Assistant Professor Department of Electrical and Electronics Engineering.